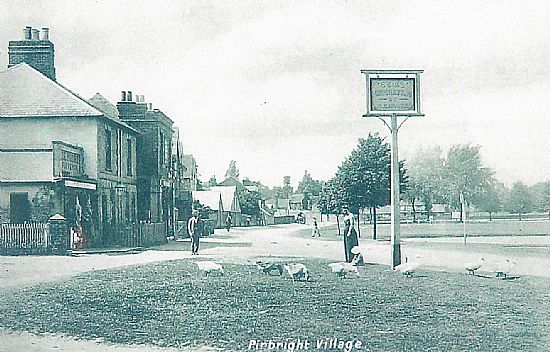 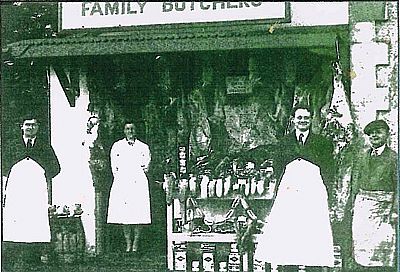 Fulk Bros, the Family Butchers, were established in 1927 by Charles Fulk, also known to his family and friends as ‘Bob’.

Bob Fulk’s father, Charles Henry Fulk started his butcher’s shop at Aberdeen House, Star Hill, Woking in about 1900, shortly after he married.  It was built about 1860 with a yard at the back to hold livestock.  Well-to-do customers would come to the shop in their horse-drawn carriages to give their orders outside the shop!

The Brookwood shop and old slaughterhouse, situated in the yard, was opened by Bob Fulk on June 7th 1927.  Animals, mainly sheep and cattle from the West Country travelled by train to Brookwood.  Cattle and sheep from Scotland and Devon came back in wagons on steam trains to Brookwood station and driven to the fields in Lye Road until needed.  Gate boys were employed to close garden gates to stop animals straying. 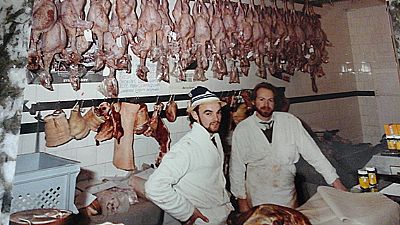 Drovers taking up to 3 days bringing animals from Chichester and Barnham, some being dropped off at other butchers along the way.  The drover ‘Dawky’ was paid 3 chilling’s. Lambs cost 7/6, (37½ p) in today’s money. They now cost from around £75.00 plus slaughtering and delivery costs! The Brookwood slaughter house has been close for many years and is now outsourced.  Later the animals were raised by Bob Fulk on farms in Pirbright and Normandy.  Raising his prize winning herd of Large White pigs which were exported all over the world.

Pirbright shop followed in the late 1930’s, when Tony’s father Bob took over as tenant from Jim Daniels, paying William Archibald Rice the princely sum of 7s 6d (37½ p a week) per week for the former cartshed, once belonging to Grove Farm (behind the Cricketers).  At the time of rationing the weekly allowance for meat was 1s 9d (8p), plus 6d for corned beef.   There was no refrigeration, blocks of ice were delivered from the ice factory in Walnut Tree Close, Guildford and used in the fridge.  Come Saturday, they were left with a large amount of water to sweep out! The shop had three shutters and during the freezing winters braziers were used in the shop to stop the meat freezing.  Early in the 50’s windows were installed and ‘Fridgiair’ fridges were put in to make life easier.

The photo at the top shows Pirbright Village in about 1900. Very little has changed. 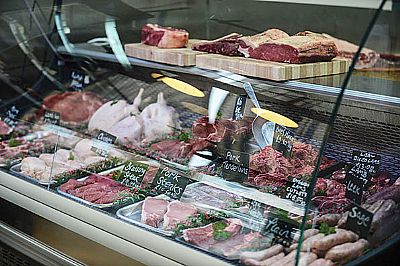 Now headed up by daughter Jo, the 4th generation, Mr Fulk is still firmly the face of the business.  Mr Fulk says the secret of Fulk Bros success and longevity is quite simply… tradition, high quality meats, unique customer service and most of all our customers, many becoming lifelong friends. Mr Fulk continues to buying livestock ‘on the hoof’ directly from farms and markets.  When he is not in demand to judge at agricultural shows you will find him in his local pub enjoying a shandy and a packet of ready salted!  Brookwood shop is managed by Tony Ward, serving 41 years and Steve Ripley manages the Pirbright shop serving 33 years. 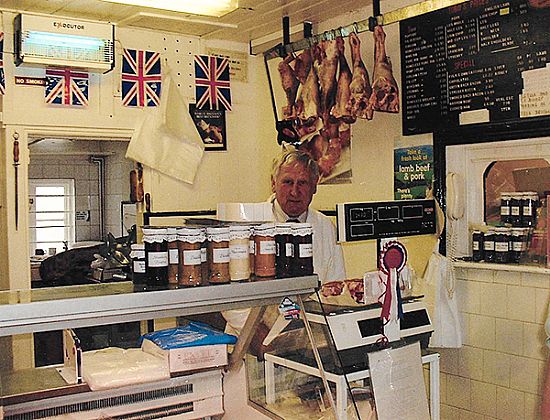